Take a look around, and it’s clear to see that tattoos are becoming more and more popular. Turns out, 38% of millennials have at least one tattoo, and they are the reason tattoos are becoming more accepted in the workplace. Finally something we can thank millennials for! Unless you don’t like tattoos, then you can blame this on them too. I for one will thank them for it.

Because so many millennials have tattoos and because they make up a large percentage of the current workforce, employers have to overlook rejecting a potential employee because of a little ink. According to Janet Lamwatthananon, a career advisor at ZipRecruiter, employers wouldn’t have enough potential candidates to choose from for jobs if they began completely ruling out people with tattoos. That being said, if you’re wanting to get a tattoo and your parents keep telling you, “You’ll never get a job with that tattoo!” they’re technically wrong.

Although they are more widely accepted than ever before, getting a tattoo is a decision that should be taken seriously. They are permanent after all. Here’s are some things to keep in mind so you can safely decide if a tattoo is right for you.

Turns out the Food and Drug Administration doesn’t regulate what goes into tattoo inks. YIKES! So it’s important to research tattoo shops in your area to find out what kind of inks they are using. Some tattoo inks use pigment that is used in exterior car paint, so like, these inks are no joke. Decide if you really want that in your body forever. Look into vegan inks as well. Some tattoo parlors use vegan and all natural inks that are generally safer for your skin. In general, however, tattoo inks are regulated by jurisdiction and they usually only permeate the first few layers of skin, making them generally safe for most people. Still, do your research and don’t say I didn’t warn you.

2. Be aware of possible side effects

After you get a tattoo, it will take about 7-10 days for the tattoo to heal fully. This healing process is kind of like when your skin heals after a sunburn—your skin will feel sore and irritated, get crusty, then peel, revealing healthy tattooed skin underneath. This is all normal. Sometimes though people experience abnormal side effects after getting a tattoo.

Side effects include a rash, fever, chills, or headache. Studies have shown that people can have adverse reactions to red inks, in particular. However, “red” tattoo ink doesn’t really indicate what the ingredients are. If you experience any side effects after getting a tattoo, see a doctor immediately and notify your tattoo parlor so they can note that their inks might be harmful. It’s also possible to develop allergies to your tattoo ink years after getting a tattoo, and because the ink is in your body, these allergies can be difficult to treat.

3. Tattoos can be extra sensitive to the sun

Unprotected sun exposure on your skin is bad, and if you have some tats, you can feel these effects even more. If you have a tattoo, make sure to lather on that sunscreen! Sun exposure to the tattoo can cause it to fade faster over time, and it can also cause slight skin irritation. You should be wearing sunscreen regardless, but especially cover up your tattoos!

Some people have reported feeling a burning sensation in their tattoos during an MRI due to the iron in some tattoo inks. As far as scientists can tell, this isn’t necessarily damaging to the individual, but notify your doctor that you have tattoos before getting an MRI to take any precautions they recommend.

5. Some studies have found ink particles in lymph nodes

In some cadaver studies, people with tattoos showed enlarged lymph nodes compared to non-tattooed people. Some studies also found ink particles in the lymph nodes. Although a few studies have noted these things, not enough research has been done to indicate whether or not this is harmful or possible for all tattooed people. 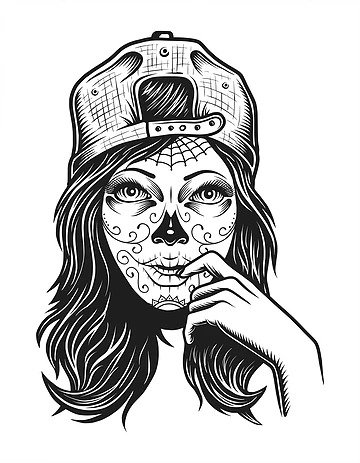 You’re probably totally thinking, “Jenn WHY did you tell me all that?! You were trying to scare me out of getting a tattoo!” No, no, dear reader. That’s not my intention. I just want you to be aware and make an informed decision if you decide to get inked up, especially now that they are so common. Although these are possible side effects and things that have been noted as problems with tattoos, not every tattooed person will experience these bad side effects. I mean, think about all of the tattooed people you see everywhere! If they all experienced horrible reactions, do you think they’d keep getting tatted?

Is getting a tattoo the best thing you can do for your body? Probably not. But eating processed food on the regular isn’t the best thing either. Generally speaking, as long as you research your tattoo parlor and talk with the artists about what inks they use and ask for a list of ingredients, you can make an informed decision. Also, it’s super important to follow the instructions for proper tattoo aftercare!

As for some of the long term effects of tattoo ink in our bodies—the jury is still out. Long term studies need to be done to make a call on that one. Now go forth and get tatted (if you so choose!).

It’s Getting Hot in Here: Perimenopause